I studied abroad in Singapore for a semester in 2019. While my classes kept me in Singapore during the weekdays, most of my weekends were spent travelling with other exchange students. In one semester, I ended up going to Japan, Korea, Thailand, New Zealand, Hong Kong, and Taiwan.

While we had a blast, we also struggled a lot with getting around. Since we’re all students, we were travelling on a budget. We generally avoided taking taxis and Ubers/Grabs because public transportation was a lot cheaper. Needless to say, we got lost a couple of times. So I thought to myself: how might we make navigating a foreign country easier for travellers on a budget?

As this was a passion project, I wanted to use this opportunity to grow and develop my skills in various areas of design. I wanted to:

We looked at what currently exists to help travellers navigate a foreign country: 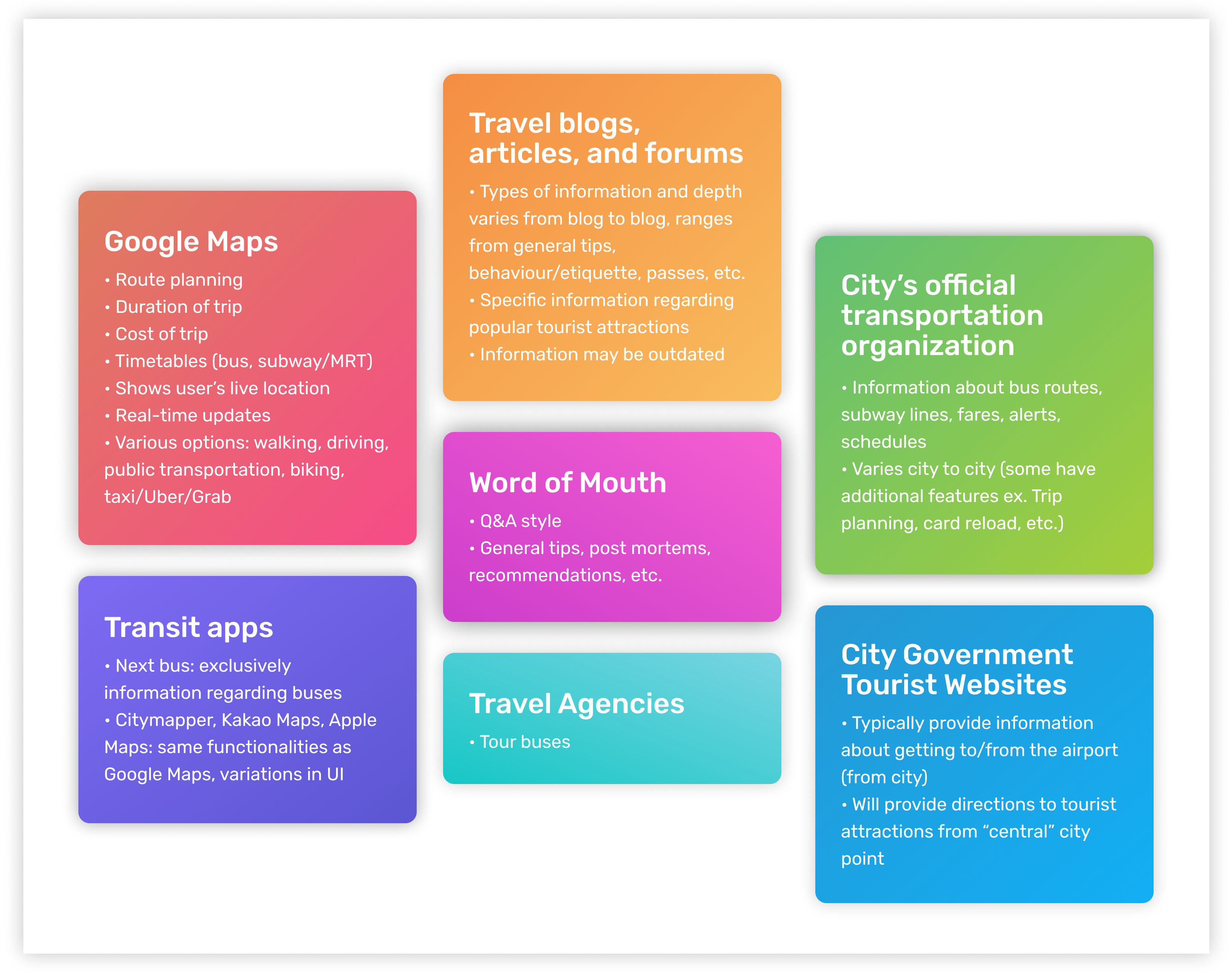 I came up with some questions to learn about the users' current experience with navigating a new environment. To begin, I built a holistic picture of a user's journey, from deciding on a destination, to their arrival, and then their day to day transportation experience. The questions aimed to find out about their research process (if any), how their experiences varied with location, as well as what their obstacles and how they overcame them. I wanted to get complete stories out of each user's experience.

I interviewed 5 users while I was abroad, these consisted of other exchange students who were also travelling on a budget. There is also additional information I gathered from casual conversations with my travel buddies. Grace and I also briefly surveyed and interviewed a handful of users back in Canada who have travelled as well. The participation criteria was:

All my research was then synthesized and a persona was created based on the findings. 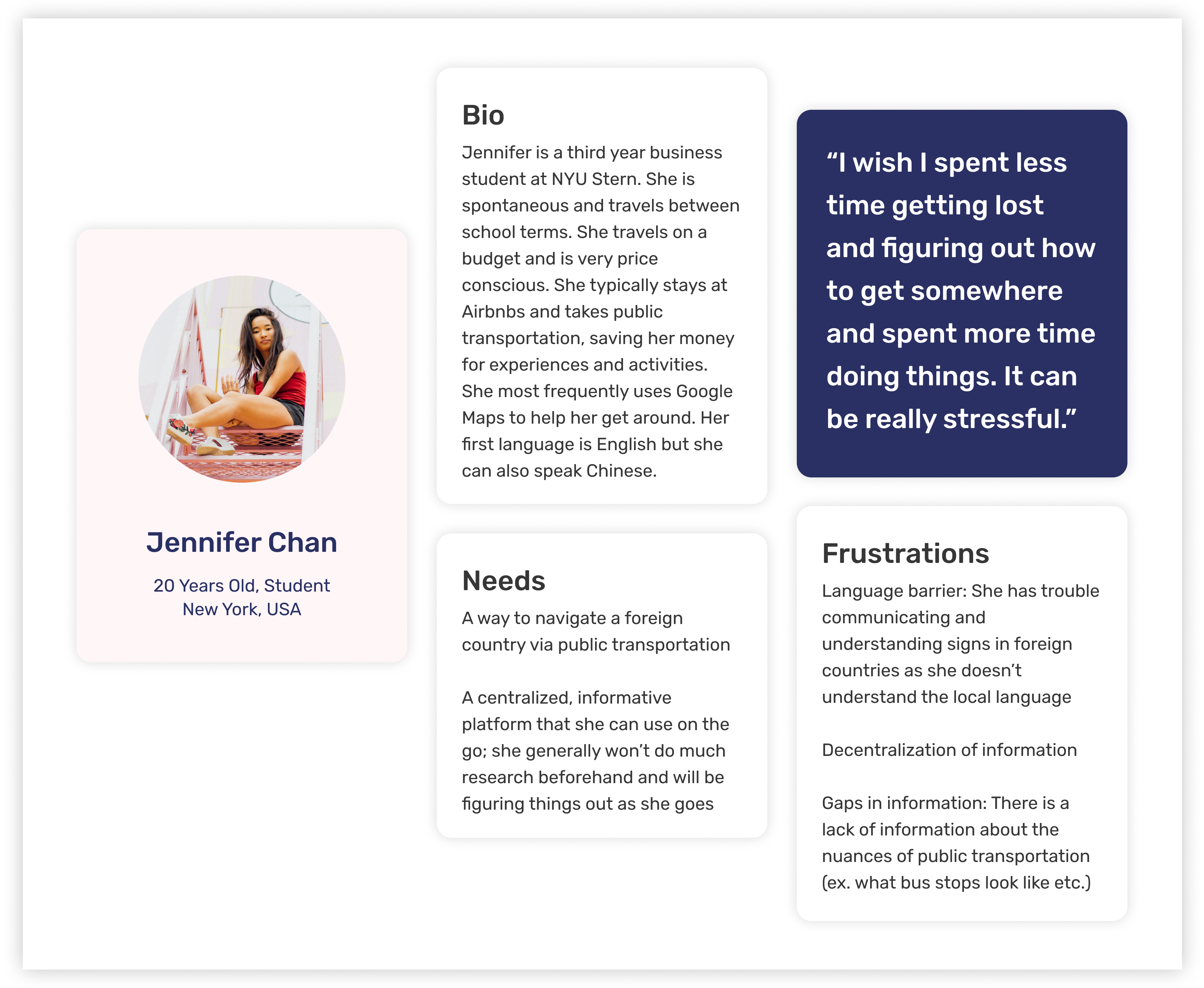 As users were figuring out things as they went on the go, I started with a solution that was mobile friendly. I was debating between a stand-alone app or web app but decided to design an integration with Google Maps instead considering that 100% of the users said that they rely heavily on it. Users also hate downloading apps. The pain point that I targeted was the language barrier as it was the root of the majority of the users’ frustrations.

Users found that Google Maps would often romanize station and stop names but the names written on signs in reality are often in the local language. This leads to a disconnect that causes users to be confused and struggle with identifying where they are and where they need to go. On the flip side, there are certain regions where station and stop names are shown in Google Maps only in the local language. Users noted that while they are able to match what is shown in the app to signs in reality, it’s difficult if they are completely unfamiliar with the language and with the short amount of time that they have stopped/passing through a station/stop. 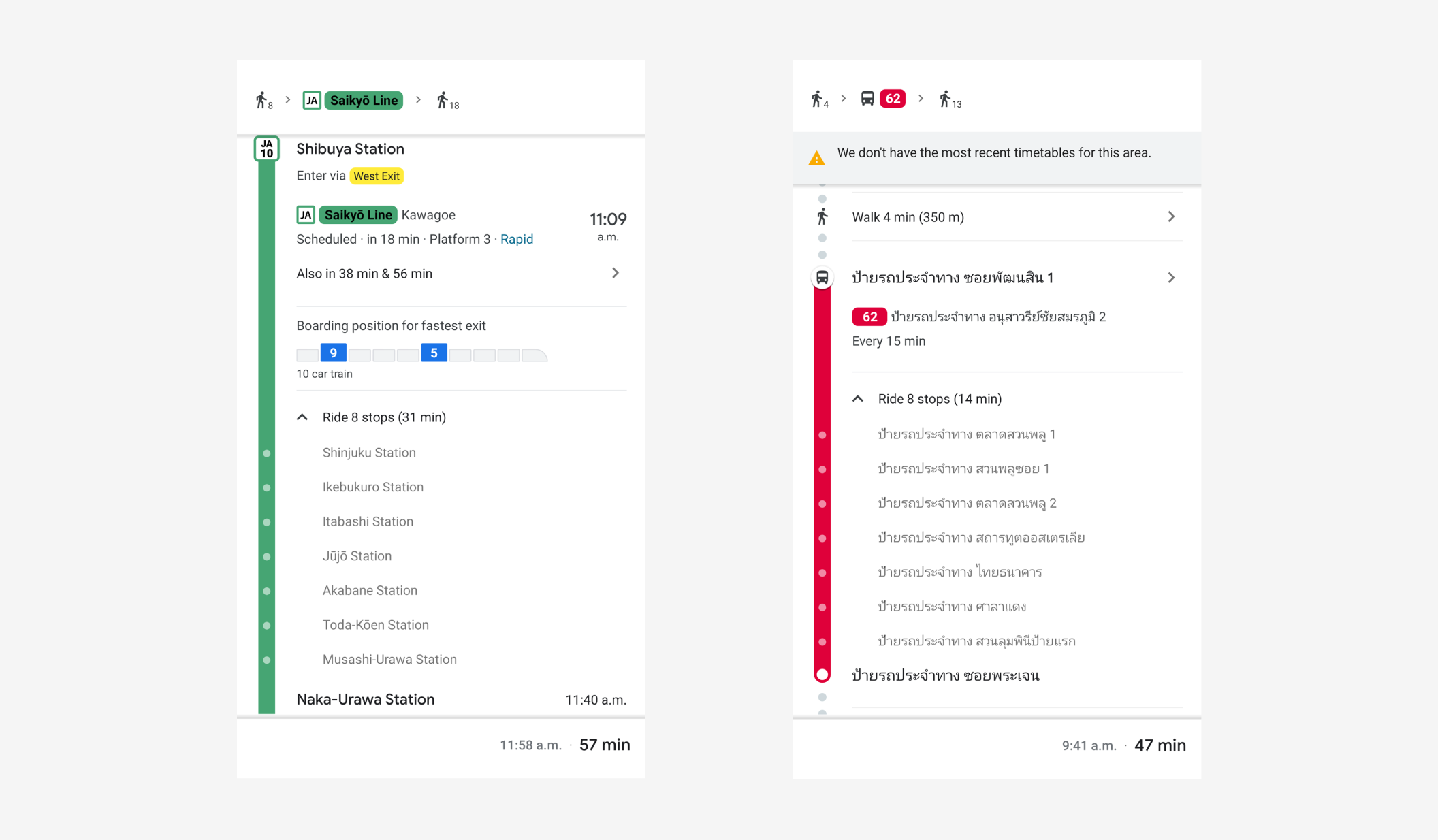 
To address this, both the romanized name as well as the name in the local language. That way, users have two references to help them orient themselves. Users noted that with just the romanized name itself, they would get confused by other stations with similar sounding names. By having the local name, users can “picture” match it with the signs to ensure that they are where they need to be. 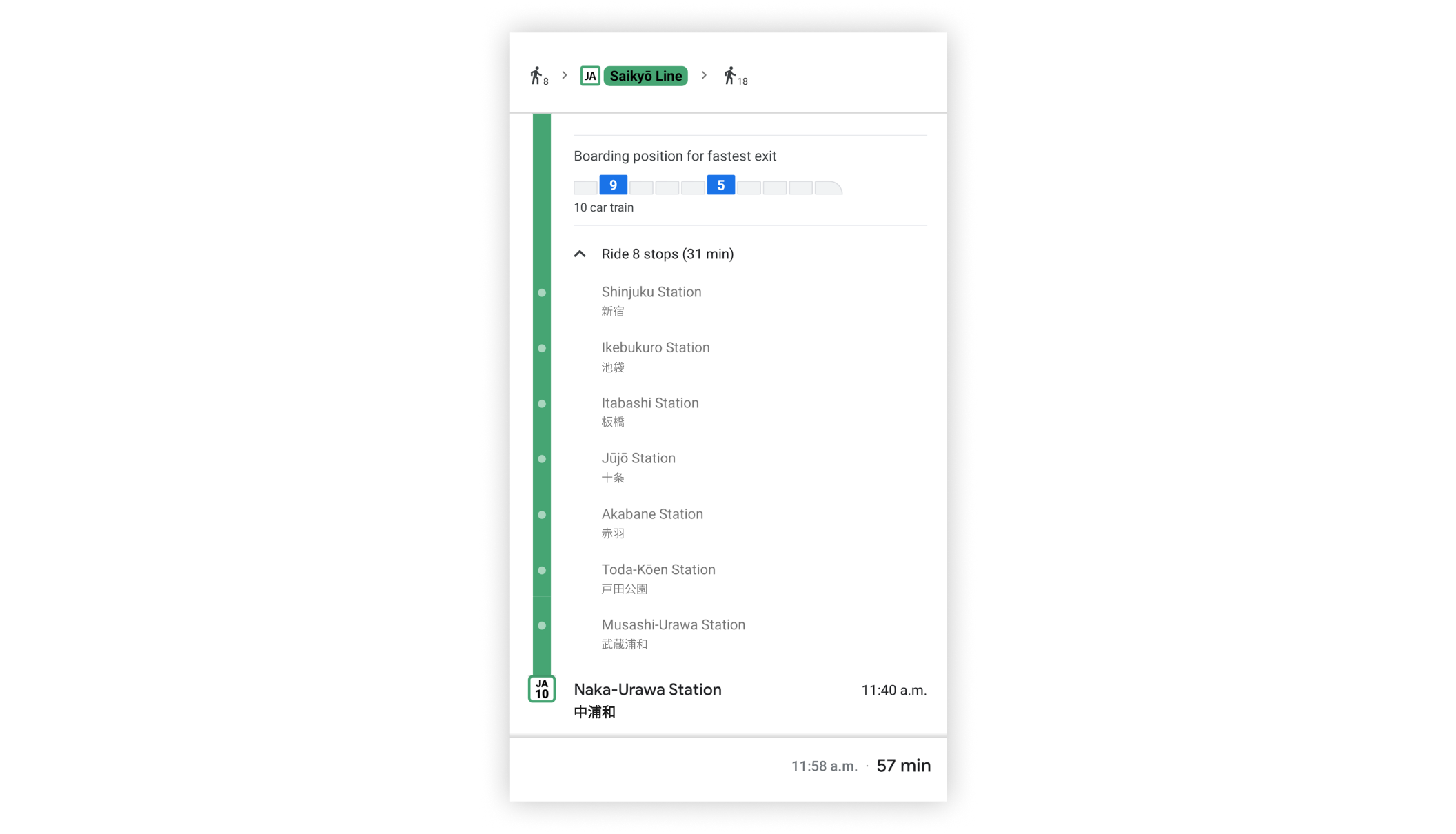 Station names romanized and in the local language.

Research shows that most transportation systems now will audioally announce the upcoming stop/station. This, along with the pre-existing romanized names on Google Maps, could help users get a sense of where they were. However, as users are unfamiliar with the local language, they are unable to discern tones or proper pronunciation which can be confusing if there are other stations of similar sounding names.

To tackle this, a speak aloud feature was added, similar to the one in Google Translate. Users are able to play the name of the station of arrival (spoken in the local language) so that they can verify with the announcements. 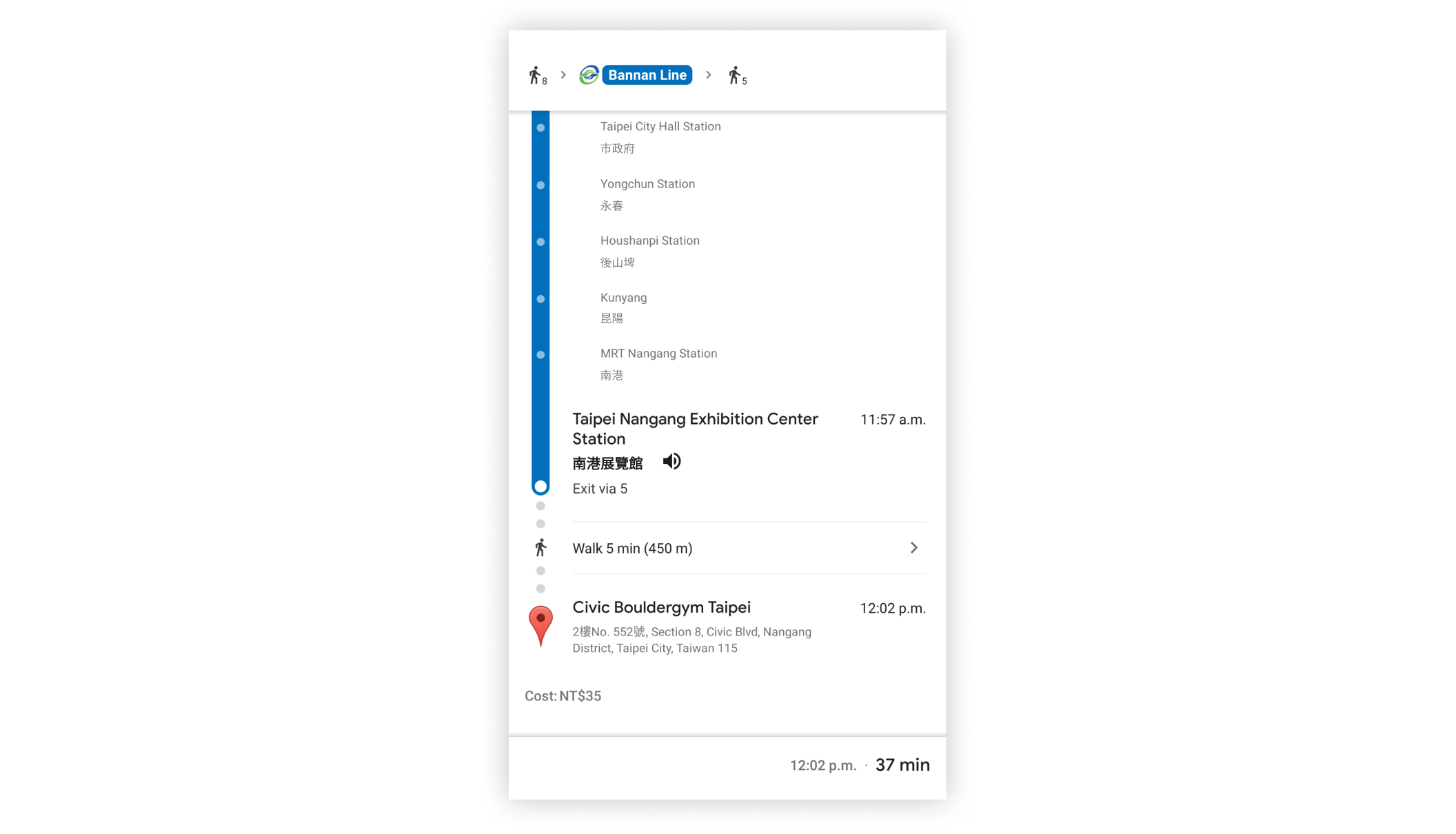 Speak aloud function beside the station of arrival.

Currently, Google Maps displays the transition between modes of transportation (bus to subway/MRT and vice versa) but it only displays the distance and walk time. When the user taps into its details, it zooms into the map showing the path. However, many stations are above or below ground with few entrances. Additionally, some stations can get rather complicated, whether it be that it’s a transfer point and has multiple platforms, hidden away, or in a really busy area (ex. In a mall). 80% of users said that they struggled to navigate the stations. 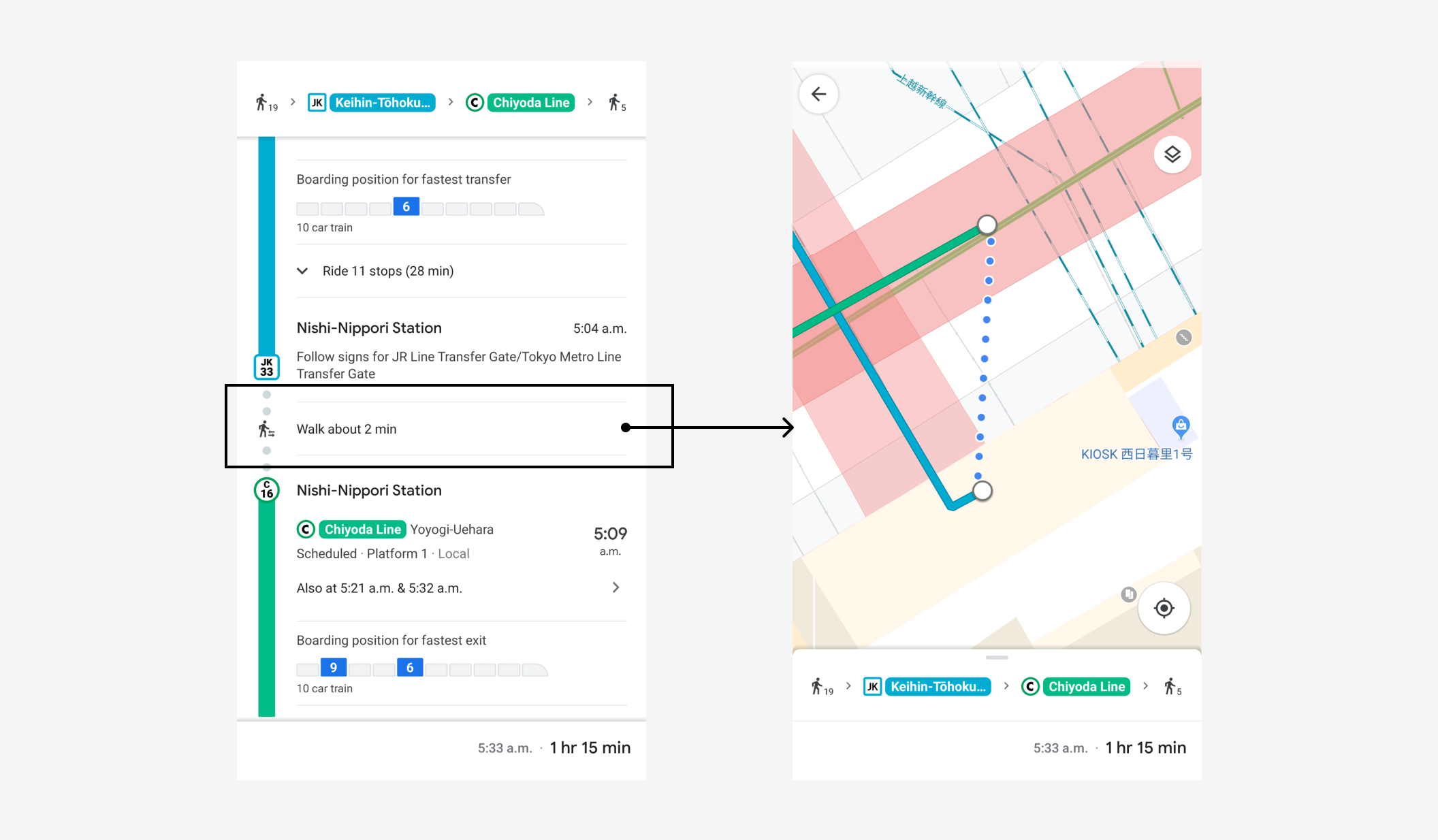 Left: Description of transfer point. Right: What is shown when user taps on “Walk about 2 min”


Google Maps provides a great amount of detail for buses and subways/MRT, but not for the steps in between. Bridging the steps between modes of transportation would make the entire journey for the user seamless and smooth. Following the style of Google Maps' walking directions that users already love, a “walking tour” of the station was created to help them navigate from transfer point to transfer point. 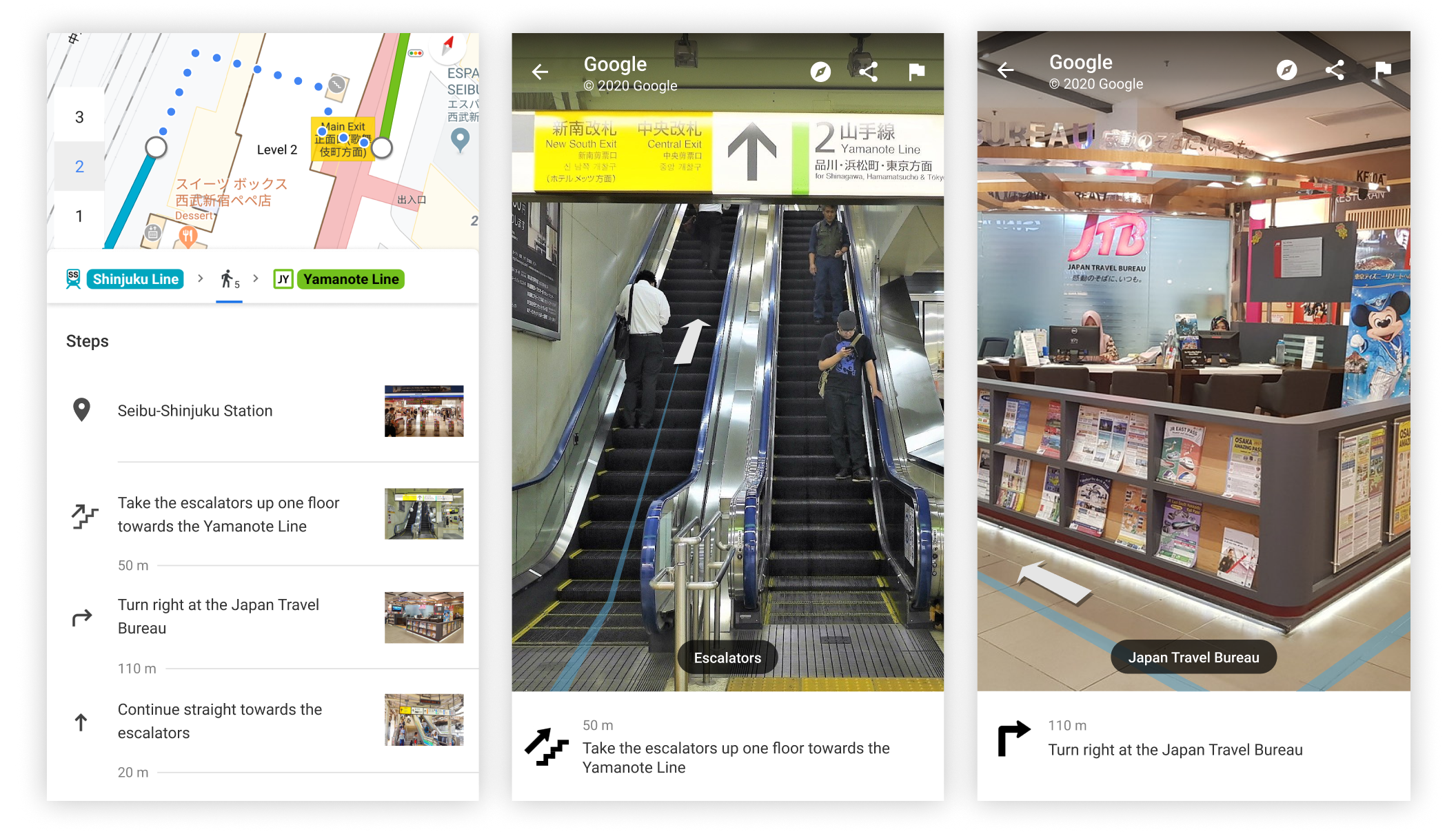 
Pictures are included to help visually guide the user through the station with directions indicating not just the flat plane but also the vertical plane (ex. How many floors up or down to go). It is designed in the same style as the walking directions in Google Maps since users are already familiar with it.

To lower the barrier of usage, the product is integrated with Google Maps. Most people have Google Maps as it is installed on every Android device and even iOS users tend to have a strong preference for Google Maps over Apple Maps. Surveyed users noted that they still use Google Maps even when they’re in a city that they’re familiar with (not just when they’re travelling) to check bus times, traffic, estimated time of arrival, or when going somewhere new. Google Maps is essential for both travellers and locals.

To keep the versatility of Google Maps, the product is designed so that it's a travel mode that can be easily toggled on or off to accommodate the varying needs of users. This saves the users the hassle of downloading and uninstalling an app before and after their trip. All users surveyed said that they really like the features offered by Google Maps and are generally happy with it. Having Travel Mode integrated with Google Maps in its settings means that it builds upon its strengths while filling in the gaps that appear during travels. 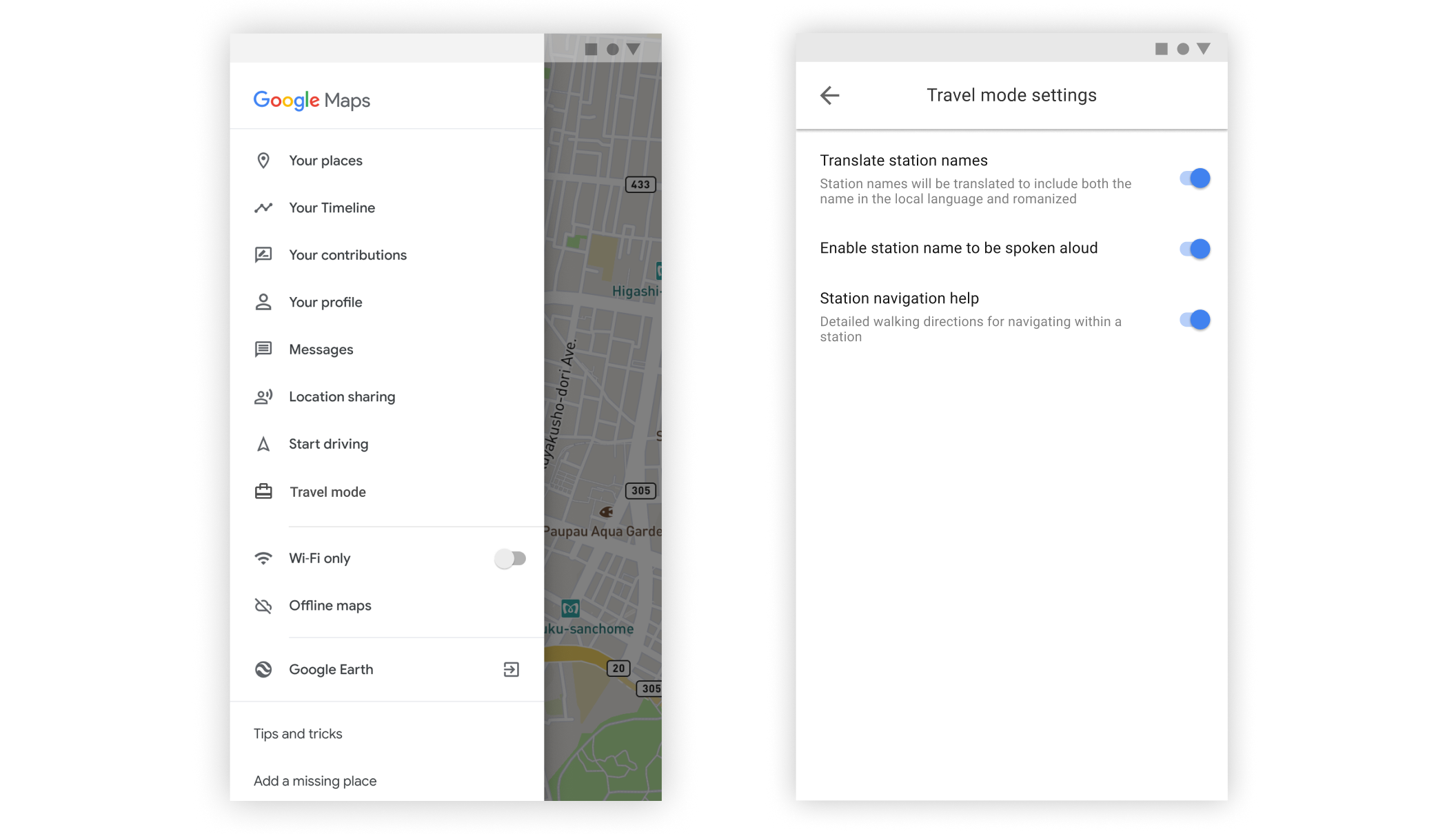 Keeping all the functionalities that users currently love while adding the additional features without the interface getting too cluttered. There is a lot of information being presented and it’s difficult to display it all in a neat way.

Say hello at joslyn.tsui@gmail.com...
Made with lots of googling and one coconut.